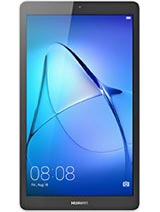 The built-in memory is 8GB you can increase your device memory using Micro SD card memory card not, and 1GB RAM.

Huawei MediaPad T3 7.0 Wi Fi Only tablet has a listing price starting from $129 in the America,

The latest device is powered by Mediatek MT8127 which runs on Android 6.0 (Marshmallow) OS. The device has powerful CPU like Quad-core 1.3 GHz Cortex-A7, with GPU Mali-450MP4 is also awesome for navigation.

The primary camera of the device is 2 megapixels, while the secondary camera is 2 Megapixels for selfie pictures. The MediaPad T3 7.0 Wi Fi Only camera features are Geo-tagging and video quality of the phone is yes available

The MediaPad T3 7.0 Wi Fi Only is equipped with the biggest Li-Ion 3100 mAh battery.